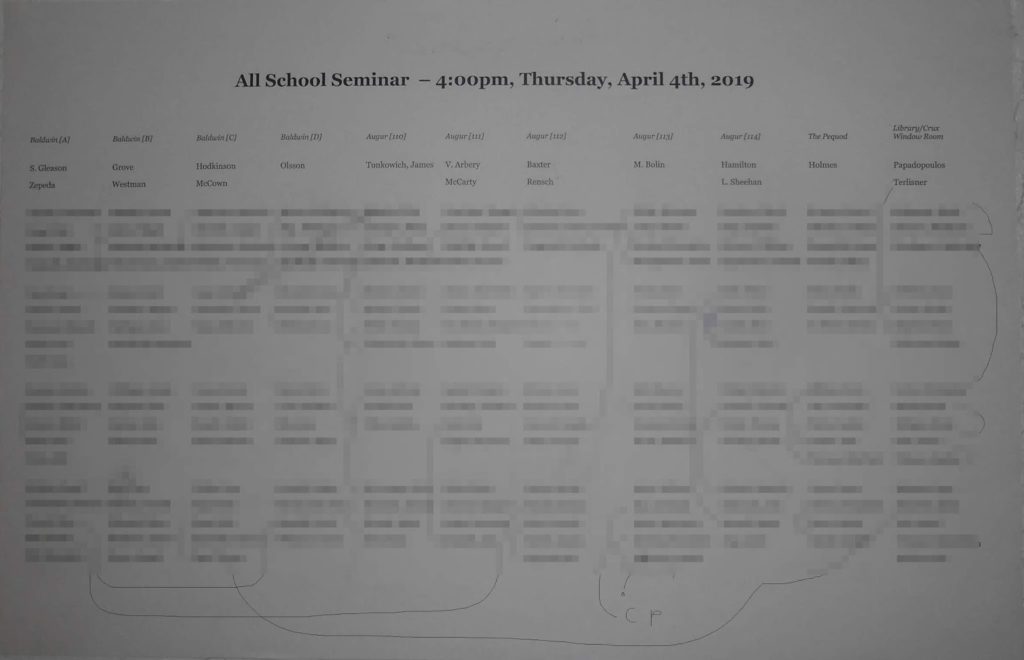 New details are emerging today about how April’s Student Couple Chart had several “very obvious mistakes”. Assembled as it always is by the WCC student life office, they, however, missed some “very obvious couples” this time in assembling their quarterly report.
How could they have missed them?” questions Fr. Olar about a couple that had been together for 5 Days by the time the chart was put together. “Surely all the new technology the school has paid for should have caught something as obvious as this couple when they were sitting together every day in Mass.”
“Its an abhorrence against the cosmic order,” says Sophomore Sophia Donaldson about these very obvious mistakes. “Some friends and I went through and drew all the connections between the couples on the chart. And there lies the problem, we had to draw them. Shouldn’t they have been obvious just from looking at it?”
Above is a redacted image of the Couple-Chart’s layout. Used to track and report on the WCC Dating Scene, its insights help the school divide students for an “all-school-seminar” into smaller discussion groups. However, because of the mistakes in this version, the school ended up separating several dating couples for the whole of the one-and-a-half-hour seminar.
“How could they be so unjust?” questions one of them who wishes to remain anonymous. “My gi-, friend, err friends and I ALWAYS study together, and because the school used a faulty database, we had to endure such horrendous social trauma. It was almost like losing a family member to be without my friends for that agonizing hour.” This is a pseudo-dating couple, as evidenced by his careful avoidance of the term girlfriend or reference to her, but was one of the first errors found in the chart, as individual students reported their courtship, not evidenced in the chart, but by the primary Mass Rule, where these two unnamed persons were discovered sitting next to each other in Mass for five-consecutive days. “They stayed next to each other after Mass for ten minutes,” says Fr. Olar, who also noticed this courtship. “With so much proof and this new relationship being the talk of the town, again how could they have missed it?”
And there was far more than just this one error in the chart. Some students were paired off with persons they had never more than talked to once and who they were definitely not dating, while seven total couples were missed and placed in the humiliating “I’m single” zone on the chart.
WCC’s Student Life Office, which compiles the chart from the scientific application of the WCC Dating Signs Rules has given no answer as of yet to the rising tide of questioning on this error-filled set. We could give them the benefit of the doubt and assume it was some sort of formatting or computer error, an accident, but Catherine Davidson, a WCC Senior who has seen more than a dozen of these charts produced without error believes there is more involved. “Could the WCC Student Life Office secretly be against dating? Or could they have changed the sacred signs which signify dating without telling anyone.” She theorizes further that they could have changed the “sitting together at Mass qualification to sitting together at a Latin Mass qualification, which would disqualify several servers who serve at the Extraordinary Form only and are thus are not picked up by the rule as they are serving.”
Peter Quinn, a NOLSey who watches WCC events with interest, believes quite differently that the school is just “eliminating relationships they don’t like from their records and trying to set up new ones artificially with parings they do want. Its like spring cleaning.” But again, that would be “interference and manipulation” says Timothy Belken, a Junior, so “its obviously not that.”
Reportedly the school will issue a statement Friday, May 3rd about its own “internal investigation into the matter”. Stay “Tunes”d
2019-04-30
Previous Post: “Ruth’s Posse” Swoops Into Lander: Who Are They Really?
Next Post: Gender Neutral Patronages: School To House Men in Dorm Consecrated to St. Scholastica