Her and Holmes: Launching May 1 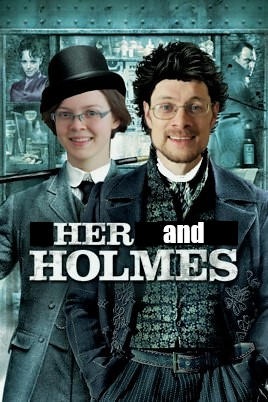 Poster imagined and created by ETBmugbug&bros

Irkutsk Ice Truckers is pleased to announce the May 1st launch of its new TV network with the show:
HER AND HOLMES

Showcasing the life, adventures, studies, and complexities of living in Lander. Her and Holmes brings the best stories of the soap opera that is the Freshman Rocker class combined with the epic stories of the WCC founding into a comedy that will actualize the potential that is in you to be risible.
Laugh away as Her and Holmes investigate together the crimes, scandals, mysteries, and equivocations of philosophy, theology, sophistry, and ice-trucking while bringing all of the above to your mental apprehensions.
Launching May 1st on the IIT channel, 8pm MST
go to IrkutskTV.com
or HerAndHolmes.com
Find out how three Bs got along in the same WCCLE

How Sherlock discovered the truth of the Bocardo syllogism

How crime syndicates have infiltrated the WCC dating scene

How Spons Verberans is the best tool for fighting crime

And more…
With an award-winning soundtrack from the acclaimed band Soul Butter and sponsored by Irkutsk Ice Truckers, Her and Holmes is a proud co-production of Mantyh Studios and Spieski Film Productions
Remember IIT channel May 1st
8pm MST